You are here: Home1 / blog2 / How can EMC improve the quality of an Electronic device?

How can Electromagnetic Compatibility (EMC) improve the quality of an Electronic device? 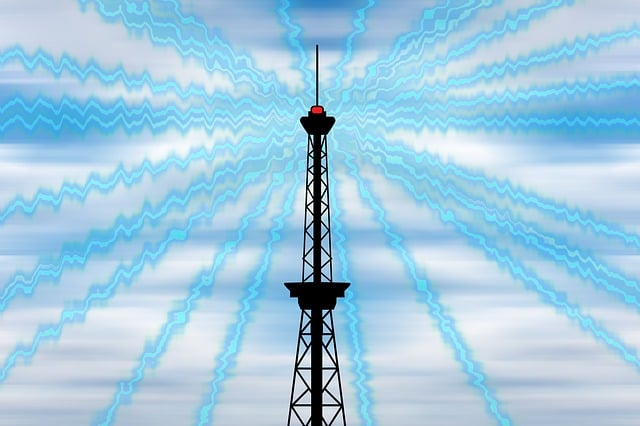 Wireless communication technology has taken over the communication engineering arena in this last decade. With ever-increasing high-frequency signals around us, it becomes exponentially important to design every sort of electronic device to withstand all the unwanted interference and perform as expected. State of the art IoT sensors are designed to work as a network of sensors coupled with a processor or cloud server working in tandem to produce the desired results. In such a closely packed wireless network, it is essential to check and ensure the compatibility of the devices and sensors.

Electronic devices of high importance such as medical devices are the most prone to electromagnetic interference, at the same time they are the one that needs to work with high precision. Hence, designing the devices to withstand EMI and pre-delivery EMC checks are becoming an integral process in electronic manufacturing.

Electromagnetic interference can be categorized based on the following factors

EMI on the basis of source is of two types. Natural and man-made. Cosmic ray is a classic example of natural EMI. Solar wind causing interference on devices in the polar region is a recent area of research. Man-made sources include communication devices, radars and many more.

On the basis of frequency bandwidth there are two types. Narrowband and Broadband. Narrowband EMI is commonly intentional radiation such as tv stations, wireless communication devices. Single-frequency oscillators within these electronic devices is the source for narrowband radiation

Electromagnetic waves are coupled from the source to the receiver via three mechanisms.

They are radiation, conduction and coupling (Capacitive coupling and Inductive coupling). The diagram below illustrates all three types of coupling. 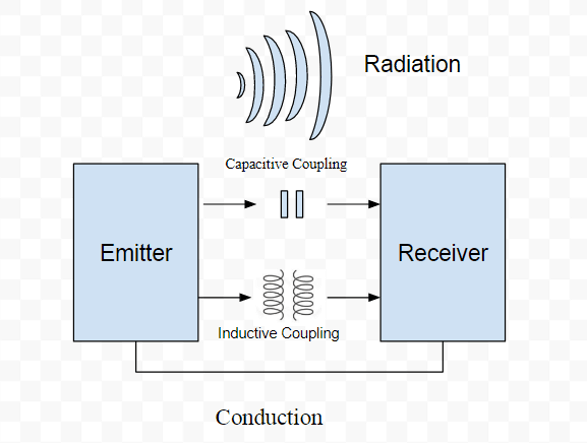 Hazards of EMI on Electronic devices

High and continuous exposure to EMI causes damage to circuits. Devices behave abnormally and give out undesirable output. This is a critical problem especially in medical electronic devices. Consider an electronic pacemaker, any interference and subsequent faulty operation may cause fatal damage. Hence designing circuits to both withstand EMI and to emit less EMI is important.

Devices operating with modulation, demodulation circuits are the worst affected since interference noise corrupts the original signal. Spread spectrum. Frequency hopping are some techniques that can be utilized to minimize errors in such devices.

The ground plane of PCB acts as the first line of defence against EMI. Steps to be followed during ground plane design are

Metal shields such as a faraday cage shall be used to protect PCB. Further, metal surfaces shall act both as ground planes and EMI shield. EM waves incident on metal planes is conducted as current only on the surface of the plane due to skin effect. This protects the inner circuits from interference. Boxes made of conductive foam or metal gaskets can also be utilized for this purpose.

Emission: Tendency of the device under test to generate electromagnetic energy intentionally or unintentionally

Susceptibility: This is the tendency of a device to malfunction under EMI. Higher the susceptibility higher the damage the device suffers when unwanted signals interfere with it.

Immunity: immunity is the ability of the device to withstand any EMI and work properly. This is opposite of susceptibility

International and National standards and laws

Typically the device under test is placed in an anechoic chamber to cut out external interference during test procedure. Radiated emission tests are done using antenna setup connected to a spectrum analyzer to measure radiation. Conduction emission test is performed using an EMI receiver via an ISN (impedance stabilization network) located within the test chamber.

Susceptibility or Immunity test is performed by placing the device under test through a continuous or impulsive EMI source to check its functionality. This testing ensures that a product works fine in a simulated RF proximity that may occur in the real world. Pre compliance testing softwares are also available to avoid device failure after physical manufacturing.

Electromagnetic interference is an unavoidable problem in the current wireless scenario and hence considerable research has been put in to improve Electromagnetic compatibility of the devices that we design. By following standardization, testing, and quality steps as specified, EMC compliance of a device can be improved and enhance its reliability and life.

At TronicsZone we provide reliable and robust Electronic Design Services. We specialize in designing electronic products that are low cost to manufacture but are superior and long lasting. We have enough experience to ensure that the products we design comply with popular EMI/EMC standards and can pass the EMI/EMC tests easily or with very little modifications.

TronicsZone can help you with your next challenging Electronic Design