Do you already have a PCB done and need it to be professionally reviewed? Check out our PCB Design review services.

Why choose TronicsZone for your circuit board designs?

Few of our PCB Design examples 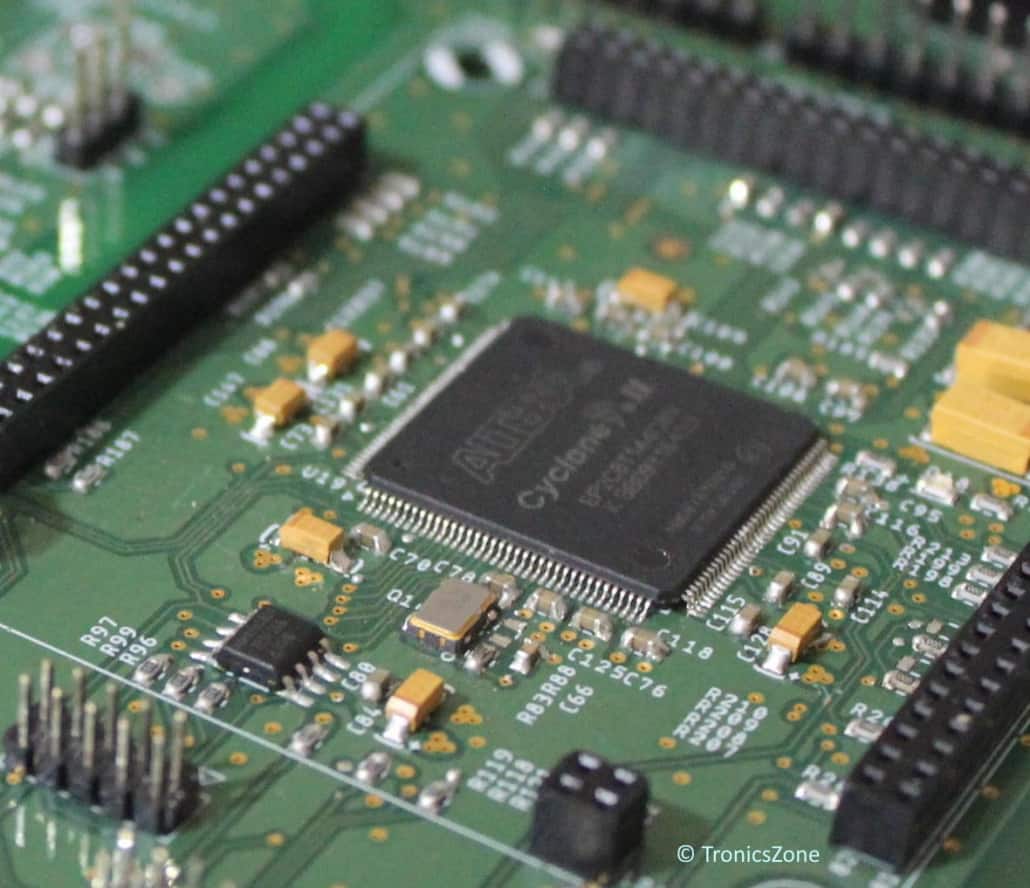 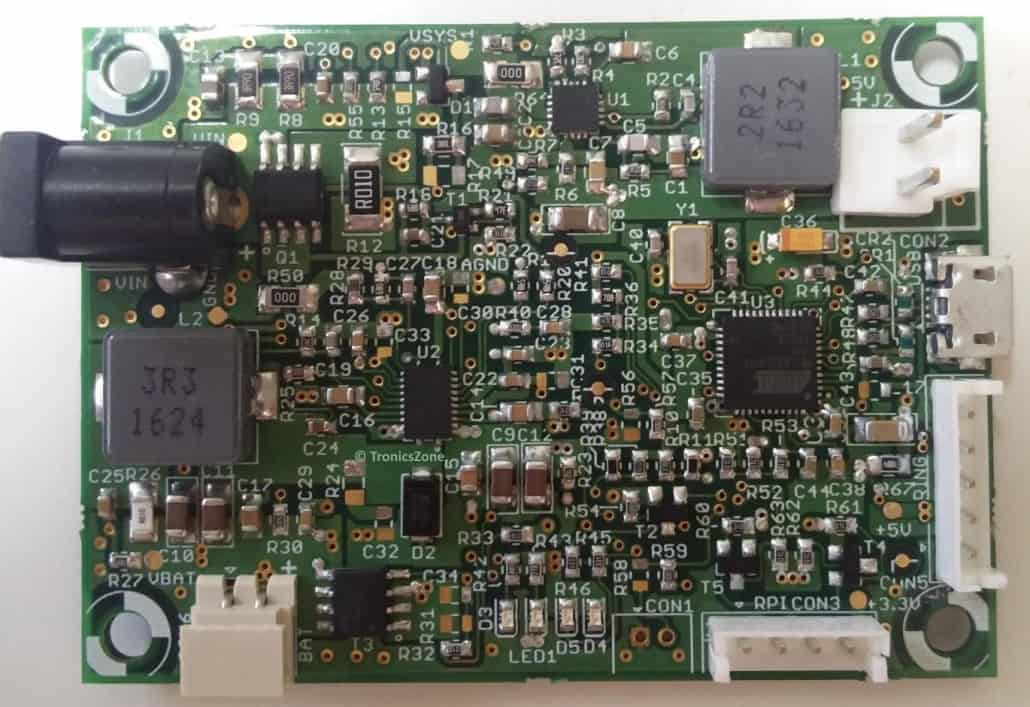 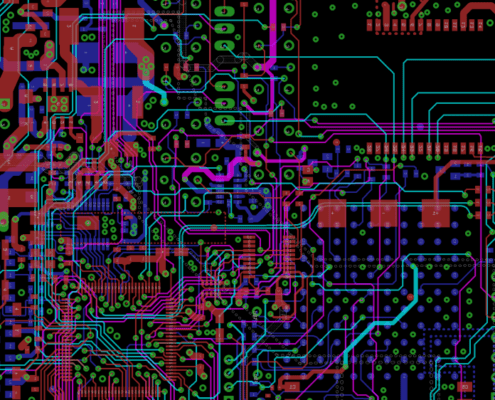 PCB is an acronym for Printed Circuit Board. A PCB layout is made to electrically connect the electronic components through conductive tracks and pads. It forms the backbone of all Electronic Design Services. Hence, it must be carried out with utmost care & responsibility. It can almost single-handedly determine the success of an Electronic Product. These components are soldered onto the PCB to provide electrical connectivity and to fasten them onto the board. 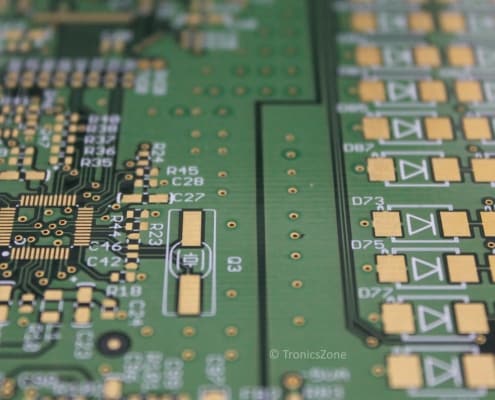 The PCB consists of alternating layers of different materials laminated with adhesive and heat resulting in a single object.  The layers include:

There are multiple types of PCBs including:

A single sided PCB consists on a single layer of substrate followed by a thin metal coat on one side. Conventionally, after the base metal plating a protective solder mask is applied along with the silkscreen mask to mark out the parts of the board. The Double sided PCB services include solid state drives, printers, calculators, cameras, radio and stereo equipment and power supplies.

This PCB is different and more useful than the single sided PCB because it has metal conductive layers on both sides of the substrate. The holes drilled in the PCB allows the connectivity between the circuits on either sides of the board. The double sided PCB allows the circuits and electronic components to connect to the other side using two techniques: through hole or surface mount.

Through holes allows the connections via small wires also known as leads, passed through the holes and soldered to the respective component. The surface mount technology uses the board as a wiring surface for components. This PCB allows you to make compact circuits and takes much lesser space as compared to other PCBs. The designs for Double sided PCBs include Automotive dashboards, Power supplies, HVAC systems, LED lighting, Amplifiers and Vending machines.

Multi-Layer PCBs further enhance the intricacy of the PCB by having from three to as many as ten or twelve substrate layers. The layers encapsulated between the two outer planes are power planes which supply the circuit with power.

PCB can also vary in rigidity along with the number of layers. When thinking of a circuit board an inflexible printed circuit board comes to our mind and this PCB is produced by using fiber glass as a substrate. This keeps it from twisting or bending and keeps the shape intact. They come in single, double or multilayer forms. The rigid PCB can include any device’s circuit boards which need to be in the same shape throughput its lifespan. For example the mother board inside the computer.

The PCB can be altered to make it flexible by using flexible materials like plastic but the fabrication costs tend to be greater than the rigid PCBs. They are very efficient in terms of cost and weight as one PCB covers the area which multiple PCBS would be needed.

Rigid-Flex PCB is the best possible merger of rigid and flexible PCBs having rigid PCBs attached to flexible PCBs.

A PCB can also be designed according to your technological needs thus being the best possible fit to assemble your circuit. PCB design services starts with a PCB designer who gathers all the product specifications and the requirements for your circuitry. Then using best strategic design techniques he creates a best fit PCB which is designed to cater your needs ensuring it meets the standards and competitors products in the market. Here are some steps you can follow to design a PCB:

Drawing a schematic circuit diagram is the most crucial step and should never be compromised or overlooked. For that you need a designing software such as Altium, Eagle, CAD, Allegro, ExpressPCB or Multisim software. A PCB simulation contains a whole package that you need in order to build a circuit. Eagle provides a variety of libraries, easy Graphical User Interface and the design can be altered according to requirements found in later stages or a project.

Make the schematic diagrams which can be entered into the schematic capture tool. After the completion and simulation of the desired circuit the schematic capture is contained within a file and is converted into a format which is called netlist. It contains all the tiny but crucial information such as circuit nodes, component pins and the respective pin connections with the modes or nets. Eagle performs algorithms on the designed PCB in order to ensure no errors or faulty connections go undetected thus giving us the desired outputs. It is designed keeping the width, board edge spacing, trace, hole spacing and while sizes under consideration.

The next step involves the printing the PCB of the schematic design producing the desired output. Manufactures performs DFM checks on the circuit and then finalize it to generate a film from circuit board diagram of the PCB layout software. A highly precise laser jet printer is used by the plotters to provide incredibly detailed PCB. A negative image is created from the CAD design on a plastic sheet which is then fabricated and assembled.

As specified in the Eagle layout design the circuit board is manufactured in which the inner layer black ink represents the conductive copper metal and the clear portion is the non-conducting material.  The outer layers are the opposite. In case of multiple films the Eagle PCB design is done in a way that they are perfectly aligned before registration holes are punched.

Outsource your PCB Design to TronicsZone

Learn about our expertise and design experience